Pooling together knowledge and data for more sustainable maritime transport

We learned from the COVID-19 crisis that the global economy has become highly dependent on maritime transport. Over 80 percent of global merchandise trade volume is carried by sea, and container ports have become critical nodes worldwide. Tensions on ports and terminals, particularly containers, result in shipment delays, shortages of goods and equipment, price swings, and dramatic impact on supply chains.

During the crisis, lack of truckers, time-consuming inspections, and quarantine in port customs hampered fresh food delivery globally. For example, India, the world's biggest rice exporter, suspended its exports due to labor shortages and logistics disruptions. As a result, the number of food-insecure people rose significantly during the pandemic. Changing trade patterns and imbalances have left many containers in places where they are not needed, and others are held up in ports or on ships for weeks due to congestion. The resulting unprecedented shortage of available containers has led to historically high container freight rates (Figure 1). 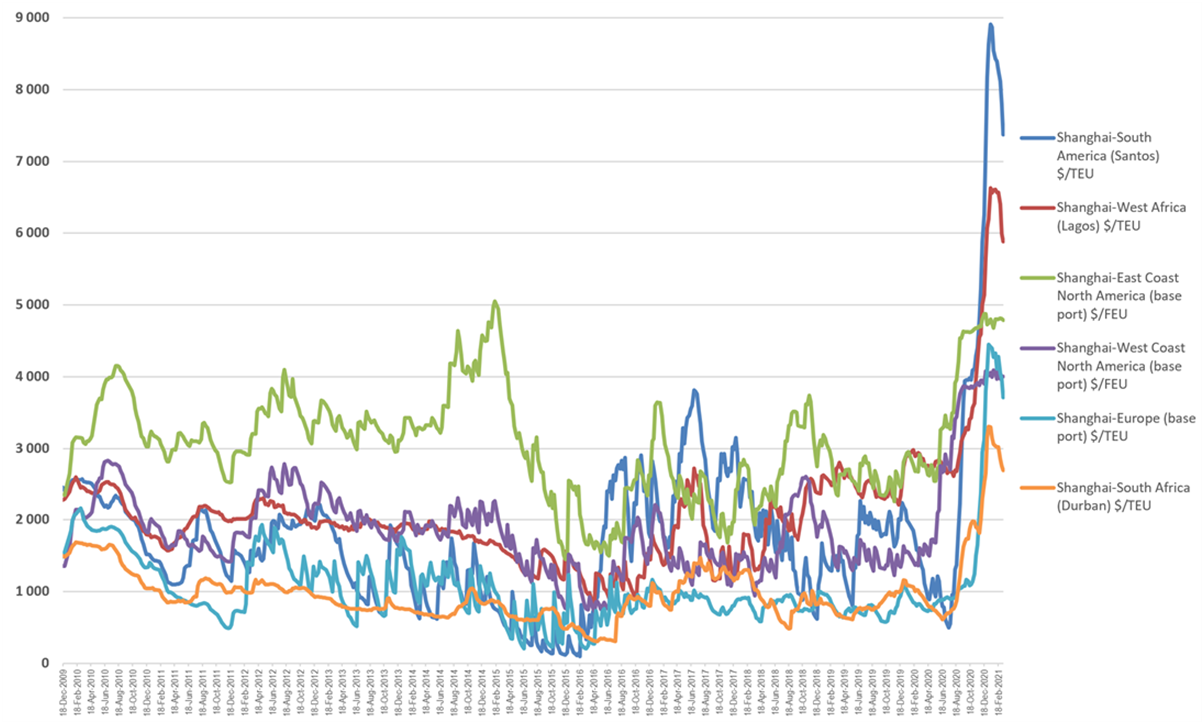 Source: UNCTAD, based on data provided by Clarksons Intelligence Network

Ensuring that the maritime sector, including ports, continues to perform sustainably—that is: support access in an efficient, safe, and greenway—is critical for a better future. The reality is that many ports around the world are performing poorly: limitations in spatial and operating efficiency, rules in maritime and landside access, inadequate oversight, poor co-ordination between the public agencies involved, resulting in a lack of predictability and reliability. Instead of facilitating trade, ports increase the cost of imports and exports, and this reduces a country’s competitiveness.

Up to recently, one of the problems to engage countries in discussing maritime gateway's performances was the lack of reliable, consistent, and comparable basis on operational performances of ports. The 2004 UNCTAD Liner Shipping Connectivity Index was a stepping stone in that direction, but we needed more granular data. Progress in the digitalization of the maritime industry, along with their willingness to work collectively towards system-wide improvements, opened new opportunities to measure container port performance and assess maritime connectivity at the port level. UNCTAD's Review of Maritime Transport 2020 reports various possible approaches, including data derived from the TrainForTrade Port Performance Scorecard, MarineTraffic, MDS Transmodal, and IHS Markit. In partnership with IHS Markit, the World Bank will be shortly publishing a Container Port Performance Index (CPPI 2020), which will, for the first time, rank the performance of over 400 container ports across the world using a consistent data source.

The UNCTADstat platform provides up-to-date data for more than 200 economies on more than ten essential topics of the economy, including international trade in goods and services, economic trends, foreign direct investment, maritime transport, and transport costs. But data only have value to the extent that they are used for decision-making. And here was the opportunity.

UNCTAD has been an active Member (since 2017) of the Sustainable Mobility for all (SUM4all) initiative hosted by the World Bank—a coalition of more than 50 public organizations and private companies with a shared ambition to transform the future of mobility. Up to January, UNCTAD was also representing the UN system and inter-governmental agencies in SuM4all's Steering Committee (seat now rotated to UNECE). In that role, UNCTAD ensured that maritime transport (especially freight) be fully integrated into the initiative's products.

South Africa is the first country that will benefit from the combined knowledge and data from the SUM4all partners. The output is producing a data-informed diagnostic on South Africa's performances on sustainable mobility relative to those in other countries in the world. UNCTADstat, along with other datasets provided by SuM4all partners, including the International Maritime Organization, and the World Bank, help identify strengths and opportunities for improvement. For example, data validated the pivotal role South Africa plays in the African region regarding regional and global connectivity.

South African ports serve as gateways to containerized trade in South Africa and its neighbors. It is among the top three leading countries in Africa over the past decade in terms of connectivity. But South Africa ranks poorly in terms of global connectivity, and the country's global shares in shipbuilding, ship-owning, ship registration, and seafarer supply are negligible. This is confirmed by the WTO trade statistics, which identify South Africa as a net transport services importer.

Figure 2: Time spent in ports and other indicators of port calls. Second semester 2020

Source: UNCTAD, based on data provided by MarineTraffic

Also, South African ports are relatively expensive, inefficient, and unreliable. They also compare poorly to regional and global comparators of similar size in terms of several key productivity indicators, with operational performance slowly declining (as confirmed in the forthcoming CPPI 2020). For example, the median time a container ship spends in South Africa port is three times the world median (Figure 2). Dry bulk carriers pay close to the world median in South African ports, which is essential, given South Africa's reliance on bulk commodities exports and the high share of ship arrivals in this segment (Figure 3).

Digitization of the maritime ports and the complex logistical chain is vital to improving port and country competitiveness, facilitating economic growth, enabling increased accountability, generating jobs, and improving services. Digitization will accelerate the necessary exchange of data across and between jurisdictions which will, in turn, lead to efficient movement, reduced costs, and improved resilience. Countries with non-digitized maritime transport sectors are exposed to resilience risks, business continuity risks, more significant inefficiencies, higher transaction costs, higher trade costs, lower competitiveness, economic growth, and employment. Despite the substantial benefits, progress in the introduction of digitalization has been disappointing.

The development of an efficient digital ecosystem for maritime transport requires a high political will, an appropriate legal, regulatory, and policy framework at the national level, and improvement in workforce skills. It also requires an agreed set of global standards that are inclusive and ensure no countries are left behind or disadvantaged. However, the introduction of new technologies increased digitalization, and the willingness on the part of stakeholders to work collectively, offer a unique opportunity through the power of data to identify opportunities for improvement and hopefully stimulate a dialogue among key stakeholders and move this essential agenda forward for the benefit of all.